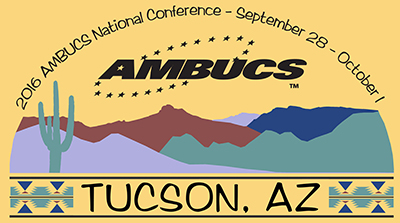 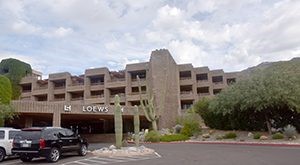 The Loews Ventana Canyon Resort is a natural jewel set in the Sonoran Desert right outside Tucson, AZ. The buildings are designed to harmonize with the beauty surrounding it. Various attendees saw roadrunners, a bobcat (on their patio!), geckos, humming birds, and large rattlesnake. 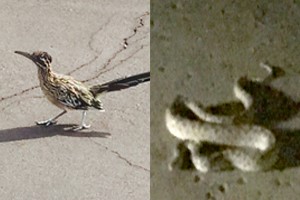 When the snake had the impudence to rattle at one of our members, she shook her glass of ice right back at him – not to be outdone.

Somehow the arrival of Ambucs from all over the country seems to have messed with Tucson’s weather. It rained (in the desert) off and on for the first several days – at times, quite hard. Some of Tucson’s residents were truly discombobulated by the precipitation.

The Early Bird Event, Under the Western Stars, was supposed to be outside by the old west town façade and include guided star gazing. The weather conspired against us but we still had a grand old time in the ballroom. The western themed buffet was very good and attendees enjoyed catching up with friends and meeting new ones.

On Wednesday morning the Great Tucson Bike Build wheeled dramatically onto the scene. Around 80 Ambuc volunteers and 100 local Tucson volunteers worked together to build out 88 Amtrykes. Teams of around five people, including one Amtryke lead mechanic, worked at 19 build tables. Another table of volunteers assembled the license plates, while runners shepherded finished bikes to a final inspector and the clean-up crew worked feverishly to break down boxes for recycling.

Two television crews came out to film a story. This one from KGUN was particularly good.  Denny Strauss, Cornbelt member, also filmed a cool time-lapse video.

That night, the rain stopped just in the nick of time for the Opening Night Celebration: Fiesta! to be held in its original free-flowing indoor/outdoor location. At the beginning of the event, five salsa making teams had 20 minutes to create a masterpiece with only the ingredients provided. Their creations were judged by team name, salsa name, salsa slogan, taste and presentation. The ‘spicy’ team and salsa names caused particular hilarity in bystanders. The panel of five judges had a hard task, as all five submissions were very good. In the end they chose the salsa made by a team made up entirely of First Timers (people attending National Conference for the first time).

The Fiesta-themed buffet, the red signature margarita – the ‘Ambucsarita’ – and the fantastic roving mariachi band added fun flavor to the evening.

Thursday morning began with the Big Hat Business Meeting and flowed right into the first General Business Session. The roll call was as light-spirited and funny as usual. Each chapter with a member registered at conference has its name called to establish voting rights. Instead of ‘here’ chapters usually share a fun fact about their city or chapter or give some silly response. So much so that our Keynote speaker, Oz Sanchez, quickly rolled up his sleeves to fit in with our fun-loving attitude! 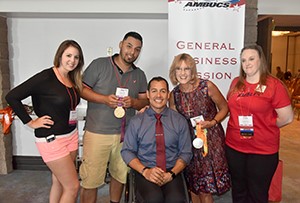 Oz, a multi-medal winning Paralympian, wowed the audience with his unconquerable spirit and advice to Know No Limits. He spoke with such honesty and grace about truly harrowing life events and the truths that became apparent by living through them. He explained that he is most proud of his bronze medal just won at the Rio Paralympic Games. He adopted his newborn niece immediately before the games…along with experiencing several other big distractions. He won the bronze medal in his favorite event despite a three week training break! After the session, Oz further charmed his admirers by allowing them to hold his gold, silver and bronze medals while having their picture taken with him.

Thursday culminated in a grand finally, the Veterans Ride and Dinner. Chapters and individuals from all over the United States purchased 29 Amtrykes for local Tucson veterans and active duty personnel. After introductions, an honor guard from the Davis-Monthan Air Force Base conducted the flag ceremony. The Manhattan Dolls’ harmony-driven WWII era sound steeped everyone in nostalgia, flirty fun and a few tears. They gave a rousing tribute to each branch of the military, announced each veteran as they took their ceremonial first ride and closed the evening with a lovely acapella version of the national anthem. It poured rain outside but the ballroom was full of warm goodwill and patriotic pride.

Friday morning started with the traditional thank you to William L. White and Amtryke Ambassador members at the Foundation Coffee. This year, it was really more like a full breakfast! Also new this year, the Regional Caucuses moved from the afternoon to the morning and included more awards and recognition. 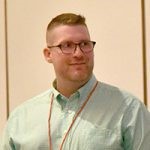 Then the Foundation Program began. Daniel Billingsley capped off his two ed sessions with a keynote address at this event. He blew everyone away with his tough love, humor and heart for our mission.

Daniel urged chapters to know WHY they do what they do (not just what or how) and to share that with community members. For example, not ‘we give away therapeutic tricycles’ (what), not ‘we work within the community to identify riders who would benefit from an Amtryke and fundraise…” (how) but, instead, ‘we save lives by giving our riders the mobility and independence of riding an Amtryke along with all the vital physical and emotional benefits this freedom provides’ (why).

He also reminded us that the vast majority of charitable giving comes not from corporations (5%) or foundations (16%) but from individuals (71%). 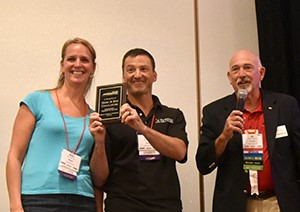 At the Foundation Program we also heard from Marc & Kim Colclasure, Therapists of the Year nominated by the Greenebucs, OH chapter. This power PT couple were clearly full of passion to serve kids with disabilities as well as the child’s whole family. They are also huge fans of the Amtryke. Their clinic, Synergy Family Therapy Specialists, is an Amtryke Evaluation Site and they also work to fundraise and create buzz in the community. 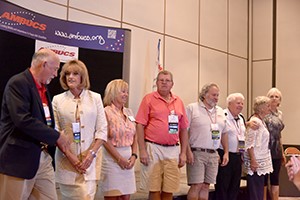 The event wrapped up with recognizing all the donors from the past year, including the members of a new Giving Society for Amtryke Ambassadors who have given over $10,000 – Named Amtryke Endowment.  Alan & Sue Eakle, Carmela Davis, Fred Sammons & Barb Rider, Al LeMieux & Cheryl Phillips LeMieux and Jack Spurlock are the inaugural members of the new society. And then there was an opportunity to make new contributions or pledges to the nationwide programs – William L. White, Amtryke Ambassadors or Cornerstone. 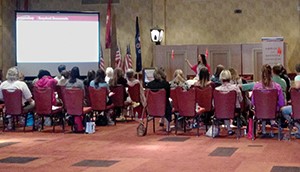 Friday afternoon was full of great Educational Sessions. Attendees could learn how communities were impacted by AMBUCS chapters last year, how to start a ramp building program, about governance issues, planning a regional conference and beginner mechanic tips. More than 30 therapists (both members and locals) attended the very first Level II Amtryke Evaluating Therapists training. The training required eight hours of participation – four hours in the classroom on Friday and four at the Amtryke Rodeo on Saturday! 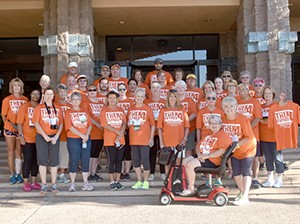 Saturday morning started with the Trek 4 Trykes walk-a-thon. 35 participants walked through the resort grounds and on its nature trails. One more stalwart trekker, who could not attend conference, walked at home. A t-shirt with her picture was carried in her honor (far right). Participants made personal donations and raised pledges from family and friends before the event. Vicki Faulkner of the Longview Too, TX chapter was the #1 Top Fundraiser; with Heike Anderson of Noon Network, KS coming in second and the Enid AM Too Walkers’ team (Hazel Kampschroeder, Jody Vogt, Karen Holland & Nellie Martin) took third. The prizes were lovely glass plaques. This year, walkers could participate in a photo scavenger hunt by taking pictures of five specific objects as they walked. David Craig of Pekin, IL won the drawing of those who completed the hunt and received a $25 Visa gift card. Altogether the event raised over $10,400 to take riders off the National Amtryke Wish List! 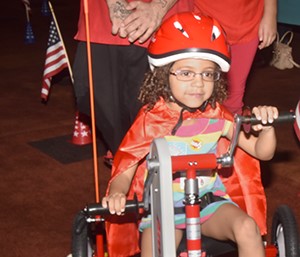 Immediately afterwards, the Amtryke Rodeo began. Chapters and individuals purchased 60 Amtrykes for local Tucson children with disabilities. If you’ve never been to the Rodeo at National Conference, it is something to see. It’s a beautiful dance of controlled chaos. About ten children come in every half an hour to be fitted to their new Amtryke, announced along with the donor of their tryke and cheered on boisterously as they ride by all the Ambucs surrounding the track. There are few totally dry eyes when witnessing that much joy from so many children! 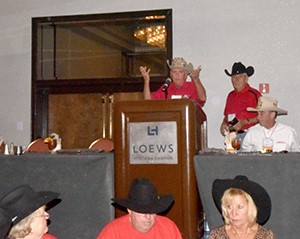 The Big Hat Luncheon & Auction followed the Rodeo. Big Hatters got an unexpected treat! David Craig, a member of the Pekin chapter and first time conference attendee, acted as their auctioneer. Man, you could sure tell he’s a professional auctioneer! His stellar performance inspired Big Hatters to even more than their usual giving fervor. The auction raised over $10,000, the gun raffle fundraiser a little under $19,000 and regional conferences almost $14,000 for a net total of around $40,000! In other BHC news, Carmela Davis was voted in as the Big Hat Club’s new Secretary/Treasurer. 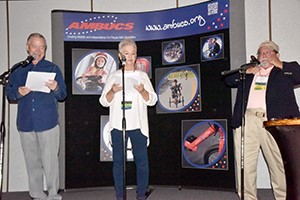 Michael Pegg, a grad student in Winston-Salem State’s OT department under the direction of Cindy Bell (a member of the Amtryke Advisory Board), gave a presentation on the results of the 2016 Amtryke Parent/Rider Survey. Ed Farabaugh, Scholarship Committee Chairperson, gave a report: this year 264 scholarships were awarded with an average amount of $755. Chapter Sparkplugs, Blue Chip Award winners and several Achievement Award winners – Newsletter, Visibility, Local Charities and Community Service – were recognized. The event also included the sale of 20 Life Memberships and the ever popular Sargent at Arms’ member roast. 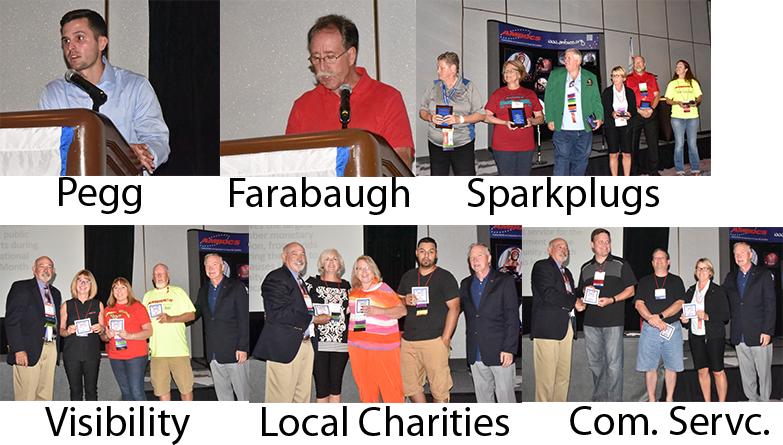 This year’s President-Elect’s Reception was less formal and more free-flowing than in years past. There was no formal receiving line but all the National Officers were there and available for a hand shake and a few words. 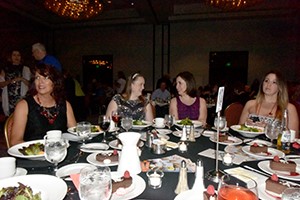 The President’s Dinner immediately followed. The Raffle Ticket Crew – Anna Blubaugh and Terri Clingenpeel – drew the winning ticket for the $500 prize. Krista Cummings, a Danville chapter member, won! Gene Waldrum, BHC President, gave his report. Superior Chapter Presidents were recognized as was Sue Haywood, the PT who inspired the Amtryke, for her 17 years of service on the Amtryke Advisory Board as she retires from it. Our highest honors, Ambuc of the Year and Project Manager of the Year, were announced to much fanfare. 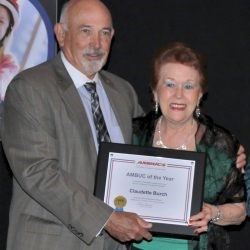 Ambuc of the Year, Claudette Burch 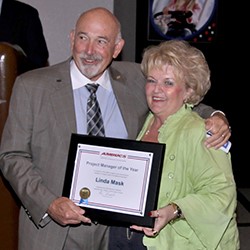 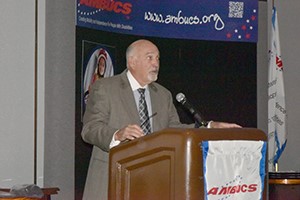 Al Bedell, 2015-2016 National President, didn’t want the organization to spend money on a commemorative ring. So, instead, Iris Lobel received her Amtryke at the Rodeo in his honor and he also received a small commemorative plaque in thanks for his service.  The retiring Regional Directors and District Governors were also thanked for their service and the new directors and governors were installed. Kevin Sheehan of the Savannah, GA chapter was sworn in as National President-Elect. 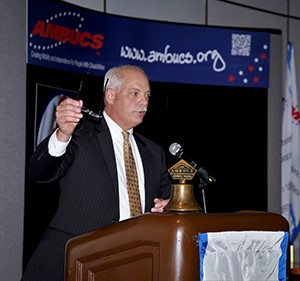 Eric Oschwald of the Springfield, IL chapter was installed as the 2016-2017 AMBUCS National President. Eric’s acceptance speech started with a simple Amtryke frame. He compared it to the deep-rooted legacy of AMBUCS. He then installed the wheels, comparing each to the Amtryke program, Scholarships for Therapists program and Community Service; explaining how all three are vital to keeping our legacy strong and meeting the AMBUCS mission.  He encouraged all of us to approach these initiatives with understanding, support and compassion.

As Past National President Al Bedell retired the flag and this wonderful National Conference came to an end, Cliff Bauerle led us all in singing God Bless America.

Hope to see you next year at Tan-Tar-A Resort October 18-21 in Lake of the Ozarks, MO! 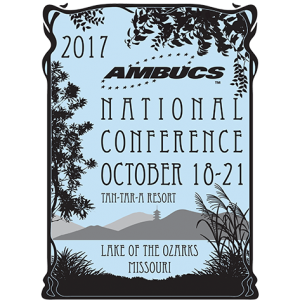