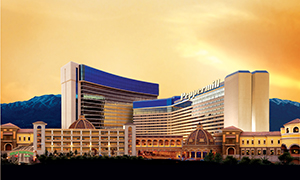 Gambling 101, our Tuesday night Pre-Conference Event, got us started out feeling lucky. Or, at least, lucky to be among friends! We had two blackjack tables, craps table, poker table and roulette table, a dealer at each to teach us the ropes and plenty of scattered tables for visiting and snacking. Rumor has it that enormous amounts of money were made and lost at the event…it’s easy to bet it all with nothing on the line but fun!

Wednesday was a busy day. That morning at the Great Reno Bike Build, volunteers put together 28 Amtrykes, while a crew broke down boxes and picked up trash and another team assembled license plates. The Reno-Sparks chapter built out 30 trykes before our arrival and were also on hand at the build. Thanks, Reno-Sparks! At the same time, other volunteers were at the Reno Ramp Build — building TWO home access wheelchair ramps. The original job just looked too simple for our pros and their team of stellar volunteers so they ended up taking on two. Reno building codes call for treated hardwood for the structure and fancy composite board for the decking, which made things a bit more complicated. But not too much for our folks to handle. 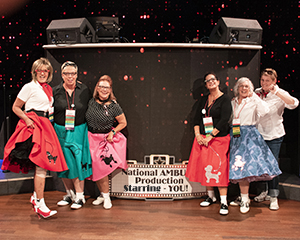 The Opening Night Sock Hop Reception & Dance was a gas! It seemed at least half of the room was dressed in 50’s gear. The nightclub was a perfect venue with a large dancefloor and a nice sound system. The National Board started off the evening with a cute dance number set to “Norman” and, after our 50’s grill themed eats and Sundaes, 2017-2018 National President Kevin Sheehan got the ball rolling with the costume contest and dance competition. There were lots of fabulous costumes and talented dancers! The Mountain Metro ladies won the costume contest and Rachel Nicks and Al LeMieux won the dance contest. After that it was open season on the dance floor with fabulous 50s fun for all. 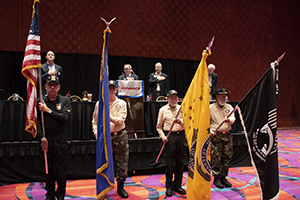 The new National AMBUCS tagline and mission statement were revealed. More about that, here. 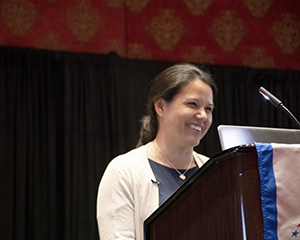 Our keynote speaker, Shana Anderson, held her audience spellbound and inspired both tears and laughter. She is a marketing consultant, military wife, and mother to three energetic boys.  When her son Reeve was born with Down syndrome, she realized that the public perception of the condition is often negative, but family members who have a loved one with Down syndrome often describe the overall experience as positive.  Parenting Reeve inspired her to use her marketing background to try to “rebrand” Down syndrome. 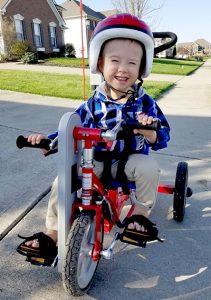 Reeve was given an Amtryke by our Greenebucs chapter (Beavercreek, OH) and he participated in a triathlon hosted by our Miamibucs chapter (Troy, OH). The Anderson household has been deeply and personally affected by our organization. Shana’s keynote was piercingly honest and heartbreakingly real but, more than anything, full of hope for the future and gratitude towards our organization and others like it.

When asked about our new tagline and mission statement, Shana had this to say, “Reeve has disabilities, AND he is part of the population that your organization loves and serves.  What I like about your new mission statement and what you do, is you make those disabilities disappear.  They are gone from your tagline, just as they are gone from Reeve when he rides his tryke.”

In response to last year’s National Conference Survey, Thursday afternoon’s programing ended with the General Session to give everyone an opportunity reconnect with old friends and make new ones. The golf outing was deemed a great success by its nineteen participants – despite the damp weather.

Friday began with the Foundation Breakfast for William L. White and Amtryke Ambassador donors. The morning continued with Regional Caucuses where chapters received many awards, conducted region business and heard from candidates for national office. 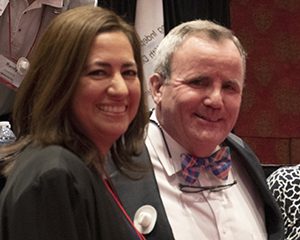 At the Foundation Program, we named the National Therapist of the Year: Leti Hall! She is an Speech Therapist and a member of the Beavercreek, OH-based Greenebucs chapter. We couldn’t do what we do without amazing therapists like Leti! Gary Westerman, this year’s Scholarship Committee chair and member of the Irving, TX chapter, reported that the national organization gave out 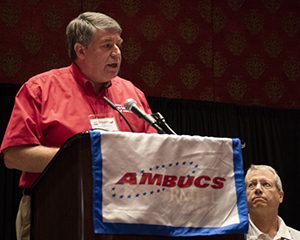 $196,150 in scholarship money to 277 students this year. With this year’s gifts, we have given out $8,987,540 to over 15,737 students since 1955! Jessica Wall, Director of Development and Programs, gave a plea for everyone to remember the importance of the chapter-building and organization-building Cornerstone Program as they consider giving. William L. White and Amtryke Ambassador givers from the past year were recognized and new gifts to the national programs were given or pledged. 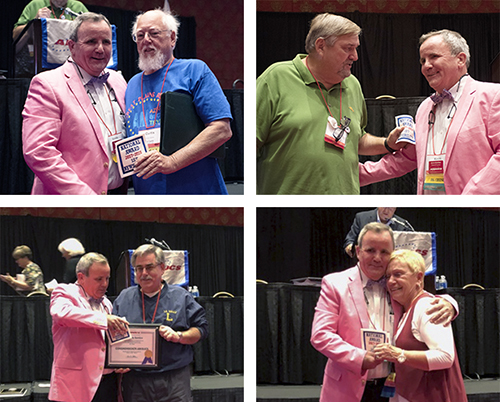 Immediately following the Sessions, everyone joined together for a high energy Oscars-style Awards Ceremony. Upbeat music and a quick tempo carried us along so quickly we finished ahead of schedule. Past National Presidents read off the award categories, winners and winning nomination – lending the event gravitas. It was a great way to honor the accomplishments of another stellar AMBUCS year. Some of the Merit Awards were given here and some later in Regional Caucuses. The Achievement Awards given at the event were: Air Capital of Wichita, KS won Newsletter; Tyler Area of Tyler, TX won Visibility; Conshohocken, PA won Community Service; and Lititz, PA won Local Charities with an astonishing $23,150/member! 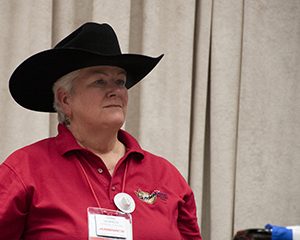 The Big Hat Dinner & Auction moved to an evening event this year. Carmela Davis assumed the mantle of National Big Hat President and Paula Bleckley came on board as Secretary/Treasurer (while Jack Bellware moved to Vice President).

Please see the Big Hat page for Carmela’s fundraiser plans for this year.

Saturday, the final day of the conference, started out with Trek 4 Trykes Walk-A-Thon to take riders off the National Wish List. Here’s a note from Donna Carlton-Vish, this year’s committee chair. 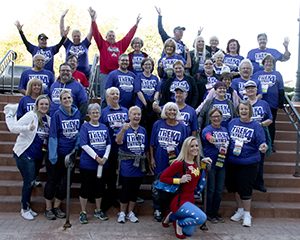 We had many runners and walkers taking the beautiful trek around Virginia Lake. There was lots of laughter and exchanging of ideas as people completed the circle, or circles. (The walk was set up for several distance choices for those with different abilities which also fits into our mission.) The mountains and the beautiful blue sky with puffy white clouds made the perfect backdrop on that gorgeous morning.

Our bright purple shirts were very noticeable, and the public asked us about our group and what we were doing. We even received a donation as we were walking. The visibility exposure for AMBUCS was outstanding. 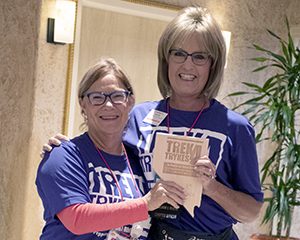 I wish to thank all those who fund raised, walked, donated money or just came out to be cheerleaders for our walk! A very special “Thank You” goes to Roger Adams from the Greater Champaign County Chapter for the excellent production of our awards. 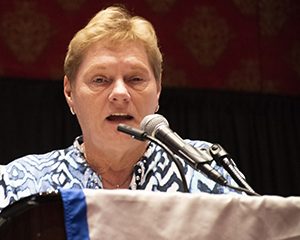 At the Saturday General Business Session we heard the Annual Report from Executive Director Jay Laurens and eight new life memberships were sold. Sue Haywood “Amtryke Momma,” the physical therapist who inspired the Amtryke and longtime member of the Longview Too, TX Chapter, announced her candidacy for President-Elect.

The biggest news is that the National AMBUCS Board of Directors voted unanimously to begin sourcing our Amtrykes from a new vendor, Manning, SC-based Bicycle Corporation of America (BCA). BCA currently uses the Assembled in America from Foreign and Domestic Parts label but is working towards the Made in America label in the years to come. The transfer from one vendor to another may take up to two years. Please stay tuned for more news on that soon.

Arnold Kamler, President and CEO of BCA, attended the session and the rest of conference. (One of his engineers, Trevor Heder, had been quietly blending in with us Ambucs since Tuesday!) Mr. Kamler gave a talk about his company’s long history and how excited they are to work with us. To top it all off, he removed his black button-down shirt to reveal a polo emblazoned with the AMBUCS logo. He mentioned his intention to start a chapter in New Jersey and National President-Elect Randy Cloud stepped forward with a check to pay Mr. Kamler’s first year’s dues. 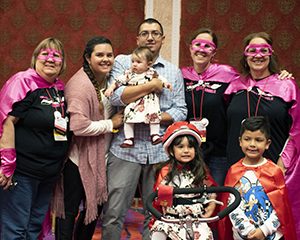 There were 58 trykes given away at Saturday’s The Great Amtryke Giveaway to riders of all ages. It was a great batch of riders (we always think that of course), with many neat connections made with Ambucs donors, therapists, mechanics, runners and all the rest of their cheerleaders! One very special moment was made in near complete silence. The enormous room rang with smiles, positive energy and pivoting hands as the entire crowd cheered on a youngster with sensory processing issues in utter silence. The large room allowed for a great set up this year.

Stay tuned for next year, we have some fun new plans to shake it up! 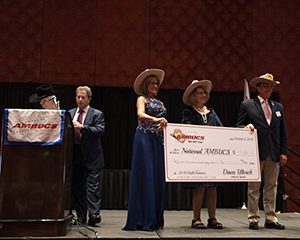 The President’s Dinner began with the President-Elect’s Reception in the Tuscany Foyer followed by the parade of national officers. It’s a dressy affair so AMBUCS decked themselves out. The National Conference Raffle winners were announced.

Diane Ulbrich, out-going National Big Hat President gave her report and pulled the winning ticket worth $7, 530. It belonged to First Timer Carolyn Ramirez of Longview Too!

The Sergeant-at-Arms, Danny Blubaugh of Enid AM, gave his report to much fear, trepidation and laughter.

In his acceptance speech, National President Randy Cloud encouraged each of us to find our successor.  AMBUCS continues only when the “torch” is passed to the next “generation.”

See you next year at the Wyndham Grand Downtown in Pittsburgh, PA – October 2-5! 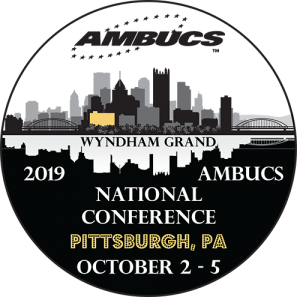