The 97th Annual AMBUCS National Conference took place in Pittsburgh, PA; at the Wyndham Grand Pittsburgh Downtown. Scroll down for the Conference Recap!

Pittsburgh Polish Sausage, Pierogies and Polka (PLUS) Party, our Tuesday night Pre-Conference Event, kicked conference off on the right foot…or the left, depending on which dance you were learning from our professional dance instructors for the evening. Everything from the Polka to the Electric Slide to the Hokey Pokey! A sumptuous spread of Pittsburgh-inspired foods paired with Pittsburgh decorations set the scene. Several members came in traditional Polish dress. In the case of our National President Randy and First Partner Donna, would they be called “leader”-hosen?

Wednesday was a busy day. That morning at the Great Pittsburgh Bike Build, volunteers put together 27 Amtrykes, while a crew broke down boxes and picked up trash and another team assembled license plates. At the same time, sixteen other volunteers worked to build a local Habitat for Humanity house.

The Opening Night Gateway Dinner Cruise was such fun! The “three-hour tour” took attendees from Point State Park, along the three rivers and back – providing many spectacular sunset and nighttime views of the great city.

Quite a few Ambucs dressed up as a favorite TV or movie character from a ship. We had Tinkerbelle, lady pirates and several cast members from Gilligan’s Island in attendance.

The third-floor open-air deck was very popular until a quick rain shower chased everyone onto the dance floor. The young ladies of Junior Lawton AMBUCS energized the room as they showed off new moves and learned some old-school ones from the other dancers.

Lacee Ecker, daughter of Pottstown AMBUCS members Aram and Donna Ecker and General Counsel at American Eagle Outfitters, welcomed AMBUCS to Pittsburgh. This year we had a large crop of First Timers and they were given a standing ovation in welcome.

Our keynote speaker for the session, Marcy Hardinger, mother of 22-year-old Amtryke recipient Hannah Hardinger, shared a deeply moving story of triumph over the odds.

Marcy walked her audience through Hannah’s early struggles with over 30 diagnoses, a series of surgeries to reconstruct her missing hip sockets and months living at Ronald McDonald House as she recovered. Hannah used a tryke at the Children’s Hospital every day and made great progress while she was there, but when she returned home Hannah began to lose some of those gains.

In April 2017, Altoona AMBUCS gave Hannah an Amtryke at an Altoona Curve Baseball Game. Hannah rides her Amtryke every day – in the rain and sunshine, cold and heat. Not long after receiving her Amtryke, Hannah took her first independent steps at the age of 19.

AMBUCS is honored to have played a role in Hannah’s remarkable journey.

Thursday afternoon’s programing ended with the General Session to give attendees an opportunity reconnect with old friends and make new ones.

Scott Buckelew, this year’s Golf Outing organizer reported, “We had a great afternoon building fellowship with other Ambucs at the golf course on Thursday afternoon. Quicksilver Golf Club were exceptional hosts and we were able to finish just before the rain hit so it was a success. Thank you to all that participated and we all hope to see even more players next year.”

Friday began with Region Caucuses where chapters received many awards, conducted region business and heard from candidates for national office.

At the Foundation Program, we named the National Therapist of the Year: Cassidy Sanchez! She is Physical Therapist and a member of the La Crosse, WI-based Western WI Wheels chapter. We couldn’t do what we do without amazing therapists like Cassidy! Pam Kerr, this year’s Scholarship Committee chair and member of the Mountain Metro chapter in Lawton, OK, reported that the national organization gave out $201,300 in scholarships to 266 students this year. With this year’s gifts, we have given over $9 million to more than 16,000 students since 1955! William L. White and Amtryke Ambassador givers from the past year were recognized and new gifts to national programs were given or pledged.

His mother, Dona, recounted how doctors made dire predictions because of his ultra-rare form of dwarfism (like Levi would die as an infant and never walk) but Levi proved them all wrong, again and again.

Dona and Levi talked about how the Amtryke provides normalcy and how vitally important that feeling is.


This year, as a special treat, lunch on Friday was included with full member registration.

Following lunch, Chief Executive Officer Jay Laurens, Amtryke Advisory Board Chair Kent Clingenpeel, President of Kent International Scott Kamler and Amtryke Project Manager Jake Schumacher gave a BCA Update on the relationship between National AMBUCS and Bicycle Corporation of America and progress towards our new Amtrykes. More news about that in the upcoming Winter issue of the Magazine.

Immediately following the Sessions, everyone joined together for a high energy Awards Ceremony. Upbeat music and presenters with panache made the time fly by. It was a great way to honor the accomplishments of another stellar AMBUCS year. Some of the Merit Awards were given here and some earlier in Region Caucuses. The Achievement Awards given at this event included: Edmond, OK won Newsletter and Community Service; Air Capital of Wichita, KS won Visibility; while Lititz, PA won Local Charities with an astonishing $22,831/member!

The event raised over $25,000. The Blanket Raffle raised right at $30,000.  Thanks to out-going National Big Hat President Carmela Davis for a great year.

Please see the Big Hat page for Jack’s fundraiser plans for this year.

Saturday, the final day of the conference, started out with Trek 4 Trykes Walk-A-Thon to take riders off the National Wish List.

This year about 50 walkers trekked around lovely Point State Park. There was lots of laughter and exchanging of ideas as people completed the winding course. The city, rivers, park and fountains all contributed to the splendor of the chilly but beautiful morning.

Our crowd of yellow-shirted walkers must have raised a few eyebrows as they invaded the relatively small space with cheer and chatter.

Thanks all those who fund raised, walked, donated money or just came out to be! A very special “Thank You” goes to Roger Adams from the Greater Champaign County Chapter for the excellent production of our awards again this year.

At the Saturday General Business Session we heard the Annual Report from Chief Executive Officer Jay Laurens and eight new life memberships were sold. Hazel Kampschroeder was recognized for serving on the Amtryke Advisory Board from 2005-2018. This was her first conference since stepping down as chair.

Special guest, Mr. Marvin D. Pickleworth III, came to tell the audience about the dangers of backing your phone up to the cloud – to much hilarity.

Our keynote speaker, Father Scott Lill spoke about his son, Thomas, who was born with deaf-blindness, epilepsy and other complications but engages with the world in his own unique way.

Scott recounted how the family joined together to help Thomas experience as many of the good things in life as possible. The Lill Family Motto of Empowerment: Never eliminate a “What” when you can modify the “How!” Thomas is learning, growing and developing life skills with the help of his family, therapists and teachers.

In April 2017, Altoona AMBUCS gave Thomas an Amtryke and he added bike-riding to his list of wonderful life experiences. Scott lists riding the Amtryke with his sisters as one of Thomas’ top three favorite things to do.

Scott was joined at the session by the whole Lill family: Shelley (mom), Anna and Clare (sisters) and Kara Madara (therapist).

There were 24 trykes given away at Saturday’s Great Amtryke Giveaway to riders of all ages, including two veterans. It was a great batch of riders (we always think that of course), with many special connections made with AMBUCS donors, therapists, mechanics, runners and all the rest of their cheerleaders! This year therapists, parents and recipients spoke just before each ceremonial first ride – which garnered a great deal of positive feedback from the audience.

The President’s Dinner began with the President-Elect’s Reception in the Ballroom Foyer followed by the procession of national officers. It’s a dressy affair so AMBUCS decked themselves out. The National Conference Raffle winners were announced as well as the top three fundraisers for Trek 4 Trykes.

The two highest AMBUCS awards were given out: Glenda Deviney (Woodward Mid-Day, OK) won Project Manager of the Year and Olivia Secord (Longview Too, TX) won Ambuc of the Year.

The Youth Auxiliary award was given to Junior Longview Too. Kassadee Clay, a member of Junior Lawton, spoke movingly about what AMBUCS has meant to her – first as a recipient and then as a member.

The Sergeant-at-Arms, Danny Blubaugh of Enid AM, gave his report to much fear, trepidation and laughter. This year he mostly fined people for doing good deeds, just to keep things lively.

For his acceptance speech, National President Vic Menendez changed into an AMBUCS baseball jersey and wielded a miniature bat – referencing his first introduction to AMBUCS as the son of an honorary member, Lawton’s ABC ball field groundskeeper. Vic’s punchline was, “Put me in, coach. I’m ready to play.” He referenced inspiring teamwork in the organization. 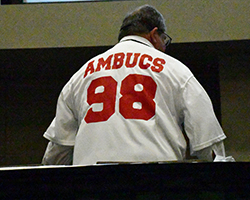 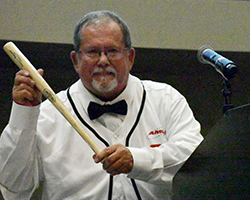 See you next year at the Galt House in Louisville, KY – September 30 – October 3! 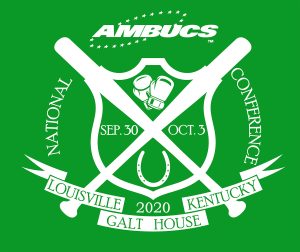