Across the US, we have thousands of volunteers and over 150 chapters working to inspire mobility and independence in their communities. Region Directors are our regional liaisons, who serve on our National Board of Directors and help ensure news, needs, and other information flow between our chapters, our national leadership, and the AMBUCS Resource Center staff. They support our Regional Conferences, and help us keep the AMBUCS mission in motion in 100 ways every day.

There are currently 10 AMBUCS regions, and the six largest have appointed Region Directors: Southern, Mid-States, Central, Great Plains, Southwest, and Northeast. Our President-Elect serves as the liaison to the at-large regions: Northern, Northwest, Pacific, and Rocky Mountain.

Read on to get to know more about your current Region Directors! 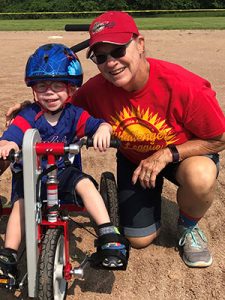 Region Director Term: 2021-2023
Joined AMBUCS in: 1994
Member of: Emerald Coast, Danville, and Greater Indy Chapters
Favorite AMBCUS memory: I get so much out of watching those we help because they radiate happiness.
Favorite AMBUCS tradition: In Danville Chapter my favorites are the Children’s Christmas Party and the Opening Day of Challenger Baseball. The joy in the eyes of the kids and parents when Santa shows up is beyond words. In Challenger baseball when we have guests and players walk to the pitcher’s mound and a group sings or plays the National Anthem, chills run down my spine.
Goal as Region Director: I hope that chapters throughout my region can get to know each other and work Shoulders Together. 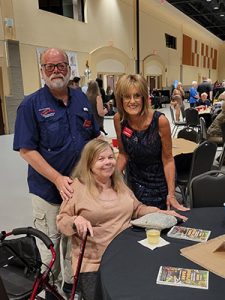 Region Director Term: 2021-2023
Joined AMBUCS in: 2011
Member of: Grapevine Chapter
Dave’s AMBUCS story: A friend invited me to a social to check out this thing called AMBUCS. During the social, the group presented a precocious little girl with an Amtryke. Hours later, she was still racing that tryke around the room and squealing with every lap. I was HOOKED!
Favorite part about being an Ambuc: Finding unconventional sources of money.
Favorite AMBUCS memory: Our chapter re-engineered a tryke for a young lady named Kayla who had no arms, with a mechanism that allowed her to steer with her head. AWESOME!
Goal as Region Director: To be part of the introduction of the new tryke designs and moving toward a certain portion of the tryke being made in America! 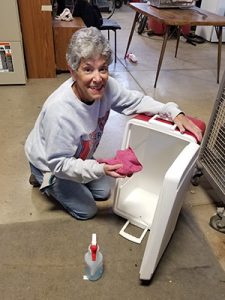 Region Director Term: 2021-2023
Joined AMBUCS in: 2015
Member of: Cornbelt Chapter
Marcia’s AMBUCS Story: After I retired, a fellow AMBUCS member, whom I had worked with, came up to me at a company retirement event, and told me he knew what I needed to do in retirement. He invited me to a meeting, and the rest is history. I have always been someone who went ‘all in’, so a couple years later I was President of our chapter.
Favorite part about being an Ambuc: It is great to see the smiles on recipients’ faces when we help them.
Goal as Region Director: To bring chapters together. There are a couple areas in the region where there are chapters a few miles from each other, and I would like to see them working together to help each other. 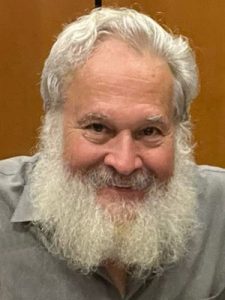 Region Director Term: 2022-2024
Joined AMBUCS in: 1981
Member of: Walker Chapter
Al’s AMBUCS Story: Grandville Michigan Chapter of AMBUCS was chartering a new chapter in Walker. A couple of their members stopped in to use my office phone and told me about what Ambucs did. I was involved in my church, but not in the community. Before they left, I sighed up.
Favorite part about being an Ambuc: Helping others and making friendships in the community.
Favorite AMBUCS tradition: Attending National Conference
Goal as Region Director: Try to get in touch with the chapters in my region and reach out with my newsletter. 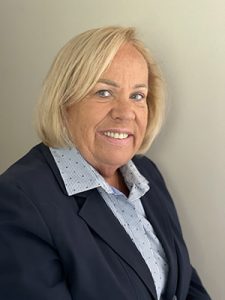 Region Director Term: 2022-2024
Joined AMBUCS in: 2012
Member of: West Norriton Chapter
Robyn’s AMBUCS Story: I had a friend who was active in AMBUCS. She had asked me numerous times to join the club at a dinner meeting. I finally made it to one and was hooked the minute I saw a little girl get an Amtryke. She was so happy, and her parents were so grateful. Like so many other Ambucs, I will always remember that moment.
Favorite part about being an Ambuc: The impact we can have on Amtryke recipients and members of our community, as well as the fellowship and inspiration I receive from other Ambucs.
Goal as Region Director: To bring my region back together and increase the number of activities and attendees. 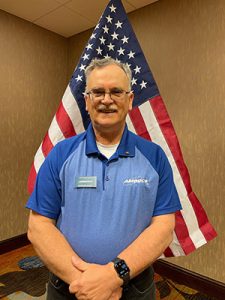 Region Director Term: 2022-2024
Joined AMBUCS in: 2012
Member of: Great Plains Chapter
Gordon’s AMBUCS Story: I had heard about the things that Great Plains Chapter was doing and I watched. When the chapter was involved in the Extreme Makeover: Home Edition project for a disabled US Army veteran, I knew then that I wanted to be part of AMBUCS.
Favorite AMBUCS memory: While building a ramp for someone getting out of the hospital, we noticed a house next door had a piece of plywood on the steps. We went to ask if someone had a wheelchair. Yes. We used extra aluminum parts and built another ramp for Harold and Barbara that day.
Goal as Region Director: “Together We Move Forward”: to recruit, retain, build and communicate.

Thank you Region Directors for all you do!

Region Directors are nominated for two-year terms at Regional Conferences in the spring. To serve as a Region Director, you must be a member for three consecutive years and serve a full term as a chapter president. Are you interested in becoming a Region Director? Speak to your current Region Director or a member of the AMBUCS Resource Center staff!