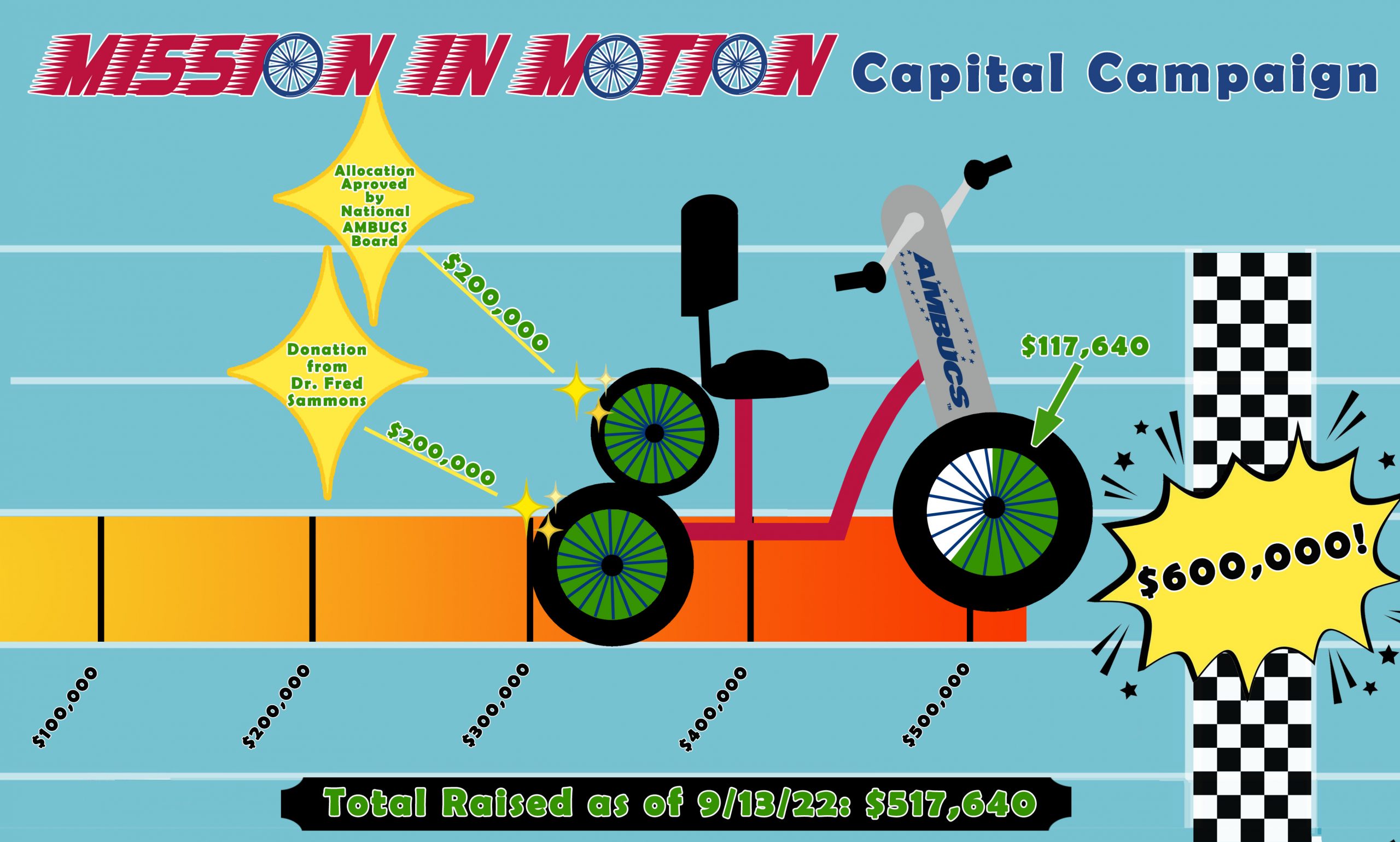 Make an Online Donation Below!

*Please consider snail mailing us a check if you would like to make a large donation to avoid credit card processing fees. Please mail your check to the address below and put “Capital Campaign” in the memo line.

Help move our Amtryke to the finish line to help us reach our goal! 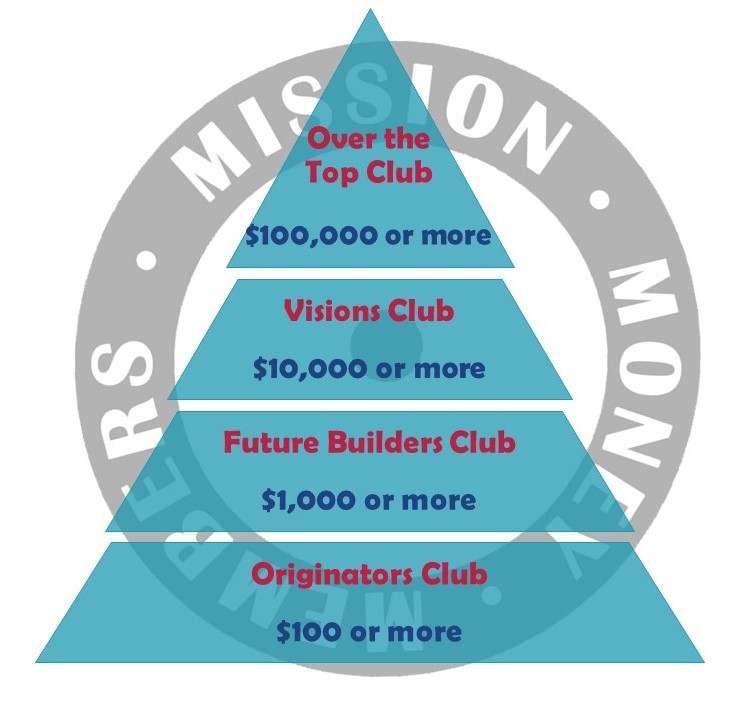 Over the Top Club

Coming out of one of the toughest times in the history of our organization, we are thrilled to be…

Celebrating 100 years of inspiring mobility and independence and building the foundation for 100 more!

In honor of our upcoming 100th anniversary, all donors to our capital campaign are official members of the Century Society, and all giving levels are designated in multiples of $100. In a nod to our founder’s creativity, the giving category names were selected from among the many names considered by William L. White. A little known historical “ambit”…

In a memoir by our founder, William L. White, he listed a total of 148 names he considered for the national service organization he would soon establish. After almost 3 years of brainstorming, he landed on The American Business Club, which would later become National AMBUCS. Among the more entertaining names he considered, but didn’t choose? Do or Die Club, On Time Bunch, Whippoorwill Club, Backup Club, Da-Da Club, Helptolex, Forrestolox, Rah-Rah Club and Clanko Club. If that last one had been adopted, our members might be called Clankos, and we could be giving away Clanko Trykes? Somehow, that doesn’t sound like a very dependable mode of transportation.

Even more interesting was the 46th name on the list, Men and Women Business Club, which – as documented by our founder’s meticulous notes – was considered on July 21, 1920 at 5:30 PM. That’s right, even in 1920, it seems this progressive leader planted the seed for our organization to someday become co-ed and reach its full potential.

Make an Online Donation Below!

*Please consider snail mailing us a check if you would like to make a large donation to avoid credit card processing fees. Please mail your check to the address below and put “Capital Campaign” in the memo line.

Celebrating 100 years of inspiring mobility and independence and building the foundation for 100 more!

From your National AMBUCS CEO and National President…

We are excited to announce that longtime beloved Ambuc, Dr. Fred Sammons of the United and Kazoo Valley AMBUCS Chapters, recently made a generous gift of $200,000 to National AMBUCS! This gift will serve as the catalyst for the “Mission in Motion” Capital Campaign, as we roll forward…out of our COVID-related challenges and into our organization’s 100th year in 2022!

The National AMBUCS Board of Directors has also unanimously approved matching Fred’s gift by allocating $200,000 from Board Designated/Temporarily Restricted assets in the National AMBUCS Permanent Fund (formerly known as the Living Endowment).

It is important to point out there are two primary components of our Permanent Fund:

If you imagine the “Mission in Motion” Capital Campaign as an Amtryke, that means two of the three wheels are fully funded at $200,000 each, for a total of $400,000. So…what about the third wheel? Well, we’ve got a little work to do. Very soon, we will be reaching out to our full AMBUCS membership and beyond, to ask for help in raising a third $200,000 “match,” to reach our total capital campaign goal of $600,000.

Reaching this goal will provide a foundation to ensure we not only survive the difficult challenges of this past year, but thrive for another 100 years…and more! The funds will be used to help fund the following strategic initiatives:

Funds will be used to offset a portion of Amtryke revenue lost this past year due to COVID and allow us to purchase Amtrykes and accessories to meet the needs of our volunteer chapters and continue our mission of inspiring mobility and independence. While the lingering global bicycle parts shortage may impact our ability to replace inventory in a timely manner, having the necessary cash assets will allow us to purchase sooner and “move up in line.”

As unanimously approved by the National AMBUCS Board of Directors, the academy will be established in honor of Fred’s achievements, accomplishments, and selfless service to Occupational Therapy, National AMBUCS and our Amtryke Program. 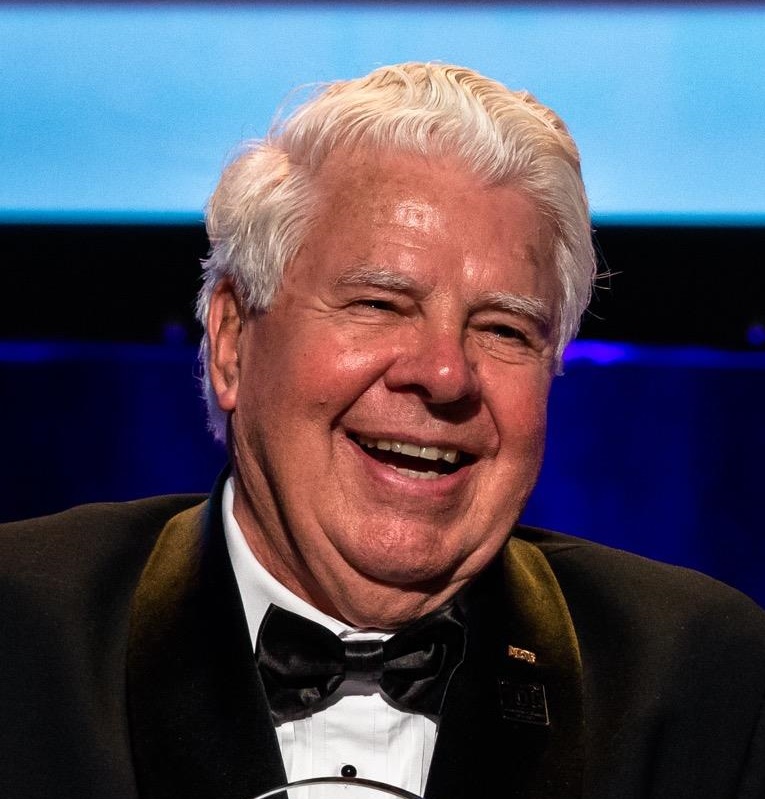 Very few of you need an introduction to this renowned Ambuc, inventor, entrepreneur and philanthropist with the ever-present smile, but here are just a few things you may not know about Fred Sammons:

Fred grew up in Wattsburg, Pennsylvania and attended California State Teachers College – which surprisingly, was not in the state of California but in the small borough of California, Pennsylvania – and is now known as California University of Pennsylvania. Upon graduating with a degree in Industrial Arts, he moved to a small town in West Virginia to teach mechanical drawing to high school students.

After serving in the Korean War, Fred attended Richmond Professional Institute which is now called Virginia Commonwealth University on the GI Bill and received his certificate in Occupational Therapy. His first job in the field was with the Rehabilitation Institute of Chicago, where he would become Chief Director of Occupational Therapy in 1957. In 1960, Fred joined the staff of the amputee clinic at Northwestern University, where he began to design and build devices to assist amputees with everyday activities. Fred recently shared, “During that time, I would go home and dream up gadgets to help my amputee patients. I’d put rough prototypes together, try them with patients, and then tinker to make them better.”

With the demand for his inventions growing, Fred decided in 1965 to devote all his time to creating, manufacturing, and distributing his assistive devices. He started his own company, initially called Button King Enterprises, after one of his devices. This later became Sammons, Inc. and quickly grew into a multi-million-dollar business. The company has evolved over the years and is now called Performance Health and is the largest global manufacturer of rehabilitation products.

In his retirement, Fred has been a devoted member of AMBUCS and our Amtryke Advisory Board. Of that experience, he enthusiastically says, “I just fell in love with AMBUCS and ate it up. It’s so fun!” His ingenuity and creativity have been instrumental in the design of countless Amtykes and accessories. Fred currently lives in Kalamazoo, Michigan with his beloved Barbara Rider, also a retired Occupational Therapist.

With the establishment of the academy, our current AMBUCS Resource Center warehouse will be converted to a state-of-the-art training and research facility, and in in honor of Fred’s love of gadgets, will be affectionately nicknamed “Fred’s Gadget Garage.” Occupational and physical therapists from across the nation will receive in-person and virtual training on the proper evaluation and fitting of “adaptive trykes for amazing people,” as our Amtryke tagline says.

Phase 3 – Reconfigure staffing for the ARC (AMBUCS Resource Center) by eliminating a current position to enable the addition of a licensed OT or PT to our ARC team:

A Master’s or Doctoral level occupational or physical therapist will be hired to lead the academy as Director of Amtryke Training and Research. Keep your eyes open for the complete announcement about this new position by July 15, 2021. The posting of the position will initially be limited to candidates in our AMBUCS membership, due to the necessary familiarity with our Amtryke line-up. If necessary, the position will be posted more widely. Click here for the complete job description and instructions on how to apply!

General Qualifications: In addition to holding an advanced degree in PT or OT, interested candidates must…

Tentative Responsibilities: The Director of Amtryke Training and Research will…

Please watch for more exciting news in the coming days and learn how you can help us reach our “Mission in Motion” Capital Campaign goal!