That’s right, as you will notice we have removed ‘disabilities’ from our tagline and mission

Words matter. Sometimes we forget their power – for good or for ill. But if you’ve ever been a child on a playground, and I know you have, you know that power.

Our crisis of words is hardly a new one for an organization that serves those challenged with mobility and independence.

The AMBUCS Resource Center has a wall of bookcases full of memorabilia from our near-century of existence. A quick survey reveals frequent use of “handicapped” and “crippled.” We would never use either word today, but when the pieces were produced the words were perfectly acceptable.

Over the past few years, we began to get similar feedback from therapists, parents and other members of the community. The word “disabled” had started to become stigmatized…like every label before it.

The community has begun advocating for itself and one another as human beings, reframing descriptive words or rejecting labels altogether. This choice is highly personal, however, and a label that one person finds acceptable may be deeply offensive to someone else.

I think it is safe to say that every AMBUCS member has been touched down to their metaphorical toes by those we serve. While the word “special” has also become stigmatized, it is so true in its original context. The people we serve are all wildly different (like any group of humans), but it seems to me that conquering extreme daily challenges tends to create a type of person I admire very much. They are often determined, game, humble, kind and open.

The VERY last thing any of us would want to do is place a hurtful label on one of our friends.

The National Board and staff wondered if the word “create” was also a bit disempowering – making it seem like all the magic comes from our members and not from the determination of those who round the bases, travel ramps, power trykes or provide therapy.

So, what does National AMBUCS do with its proud mission to Create Mobility and Independence for People with Disabilities?

The AMBUCS National Board decided that no label should be placed on the population we serve and that we, as members, “inspire” more than “create.”

Inspiring people to conquer challenges related to mobility and independence, through a nationwide network of volunteer chapters, working in partnership with physical, occupational and speech therapists; by providing Amtryke adaptive trykes, scholarships for therapists and many forms of community service.

Neither change was an easy or quick decision. The National Board began actively discussing the matter in April, after they unanimously approved a similar change to the Amtryke tagline and logo suggested by the Amtryke Advisory Board in February. The new Amtryke tagline is “Adaptive Trykes for Amazing people!”

The announcement of the changes was made at the Thursday General Session at National Conference, before our keynote speaker, Shana Anderson, took the stage. 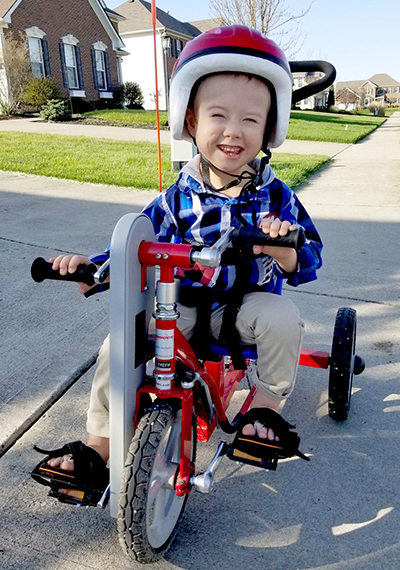 Shana spoke about her experience as mother to Reeve, who faces challenges related to Down syndrome, and about advocating for those with chromosomal disorders through a venture called Reeve’s Tees. She recounted her experience with two amazing AMBUCS chapters; one gave Reeve an Amtryke (Greenebucs) and one invited him to participate in a triathlon (Miamibucs). Shana’s piercingly open account of her experiences and her clearly genuine gratitude to our organization and others like us, captured every heart in the room.

Later, when discussing the new tagline and mission statement, Shana said, “Small language changes matter A LOT.  The change that AMBUCS made to its mission statement (dropping the ‘people with disabilities’ and focusing on what is possible) was very symbolic to me.  The point of AMBUCS is to give individuals the power to overcome challenges and NOT be a person with disabilities or limitations.  When my son is on his tryke – for that moment, he is just one of the kids, he is not ‘a kid with disabilities.’  When I see the hearts, hands and hours that go into AMBUCS each day to make mobility and independence possible for so many, I’d say that you nailed it with this new tagline and mission statement!”

We hope other people we serve have a similar overwhelmingly positive response to the change. And that you, like Shana’s audience, feel like rising to your feet and giving her statement a standing ovation.

However, we understand that the new tagline and mission statement create some hurdles for our chapters and members.

I hope you are as proud as I am of this new AMBUCS era. Maybe this change will serve as an example to other organizations and we will find in years to come that we were at the forefront of an important movement to remove labels and celebrate not only the human dignity but also the uncommonly amazing qualities of those we serve.

Today, my friend, is a GREAT DAY to be an Ambuc!